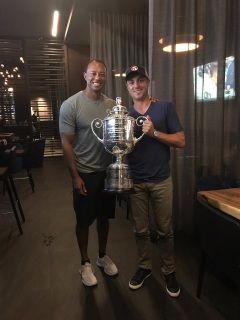 Via CBS Golf: Seventeen years later, it was Thomas who was lifting the Wanamaker Trophy with Woods cheering him on.

“And then to have him basically cheering me on, how he’s been this week or the last couple days, it’s … bizarre, it really is,” said Thomas.” I was seven years old and watching it in the clubhouse, and he hits the putt on camera, and before it can fall in on TV, I can just hear the roar outside. I’ll never forget that.
“It’s crazy to be sitting up here now after watching him do his champion’s toast and hoping that I’m there one day, and I am.” 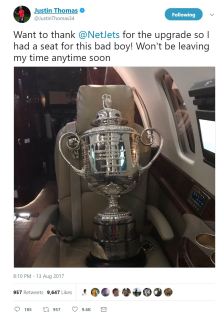 You gotta just love what Justin Thomas has been doing since he won on Sunday: from showing the Wannamaker the respect it deserves by giving the trophy its own seat, to snuggling with it in his home, to now going out and having dinner with it. Oh yeah, and it just so happens that the greatest golfer of the past 30 years decided to join him. No big deal, just good old Eldrick just hanging out with a kid who grew up idolizing him. Who knows, maybe Tiger holding that bad boy will give him the juju he needs to get back into the swing of things? We can only hope.
But it has been an absolute joy to watch Justin Thomas this year. 4 wins, 9 top 10s and made all but one cut at majors this year (that damn British Open screwed up everyone). The kid is a STUD, and though a little erratic, he looks to be a force for years to come.